After more than 25 years in automotive journalism, these days I remember the new models that make a really big impression on me. And I’m not referring to driving the wonderful Ferrari California T with its super 3.9 V8 power unit last month. While it exceeded my expectations, the practical streak in me knows that it isn’t a realistic purchase for most because of the circa €350,000 price-tag.

However, on Monday I drove the new Mercedes-Benz E-Class saloon in advance of it going on sale here this week. Like the experience of dinner presented to you by a top chef, your first impression is key to exercising your appetite for more. The new E-Class succeeded with its sophisticated, elegant and stylishly sporty character. Its long bonnet, longer body and  longer wheelbase work with a coupé-like roofline and broad-shouldered rear to replicate the lines familiar in the recently-introduced S-Class and C-Class models. 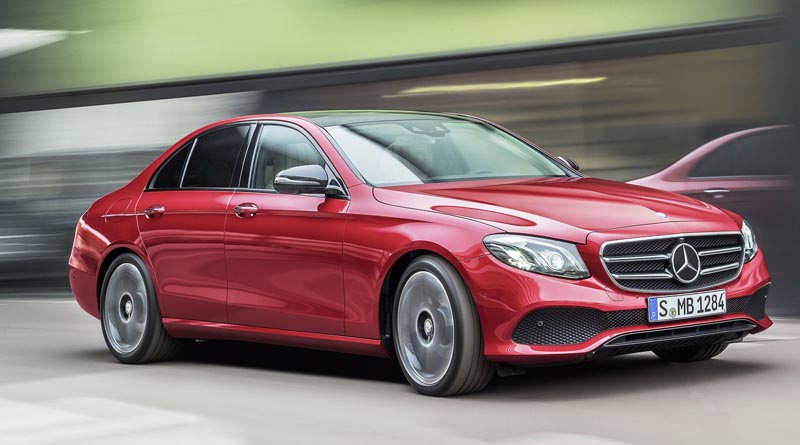 Of course, before you get too excited and get to make your selection from the menu, you must sure you can afford the fare. I was pleasantly surprised to learn that features that previously came only as options are now included as standard – the entry level Avantgarde model is equipped with over €7,000 worth of standard features compared to the outgoing version. But what is the price?

In Ireland, the main focus is being placed on the E220d Avantgarde Automatic which starts at €52,850 ex works – which Mercedes-Benz say represents an actual price decrease of €850 compared to the previous model. The version I drove had about €3,500 of extras including metallic paint. 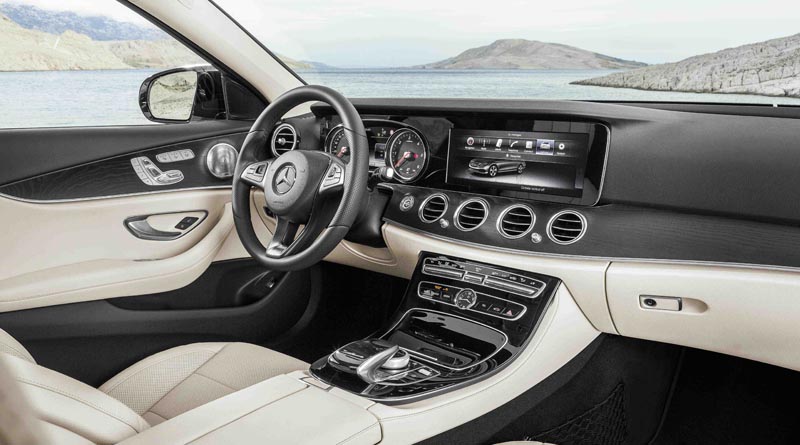 Three style and equipment lines are offered – Avantgarde, Exclusive and AMG. As before, buyers can choose between models with a bonnet-mounted star and louvered grille favoured by regular E-Class owners or one with grille inset star likely to appeal to more sporty buyers.

The Exclusive version will start at €55,210, and the AMG versions  have an entry level price of €57,650. Additionally, there will be an E350d version at €66,900. Further model variants to follow in time will include an E350e hybrid and a powerful V6 E350d. The entry-level 200d and estate version are both due in late August.

Back to my experience yesterday and getting inside the new E-Class. I admit to having seen it and having sat in it before but that was on their crowed stand at the Geneva Motor Show. The solitude of a rural Kildare setting allows one to absorb what is on offer to the driver and passengers alike.

I totally agree with Mercedes-Benz boast that the interior contributes to the look, feel and interior styling is the craftsmanship and use of authentic, high-quality materials for which the German manufacturer is renowned. The new sculptured seats are designed for long journeys, heated armrests in the doors and centre console and a choice of sixty-four interior LED lighting colours. Optionally available are two high-resolution 12.3inch display screens (a first in the segment) and three different wide-screen instrument cluster styles.  A wide choice of materials and colour combinations also give owners scope to ‘individualise’ the interior of their choice.

The new E-Class is the first car ever to feature touch-sensitive finger swipe buttons on the steering wheel which the driver can use to control the infotainment system while keeping both hands on the steering wheel. Mobile phones with the inductive charge facility can be charged and connected with no need for cables or a telephone holder.

Despite the emission and related health repercussion concerns raised in the last year, diesel technology remains a synonym for low-cost and efficient driving. And under the bonnet is the first representative of an completely new engine generation – an impressive 2.0 litre (1,950cc) 4-cylinder unit with a single turbocharger and variable geometry. It gifts a 17 per cent weight reduction on the previous generation power unit. Mercedes-Benz says that this combined with a particularly high injection pressure of 2000 bar make extremely low consumption figures possible. Aerodynamically, it has a drag coefficient of 0.23.

Amongst its standard fitments on the new E-Class is ‘Active Brake Assist’. It provides support during emergency braking. There is also ‘Attention Assist’ with adjustable sensitivity to alert the driver to inattentiveness or drowsiness and ‘Crosswind Assist’, which mitigates the effects of strong crosswinds.

There is another optional extra driver assistance package also available and while I don’t usually get in to options, this is interesting. An optional package offers a further suite of safety features that Mercedes-Benz claims makes the E-Class the most intelligent saloon in its segment. One of these being a system that moves the driver or front passenger away from the danger zones when an imminent lateral collision is detected.

Another safety innovation is a sound warning that triggers reflexes and prepares occupants if the risk of a collision is detected. You can have a semi-autonomous Drive Pilot  for about €3,400 extra and remote parking is also available for an additional €2,700.

On the road
The driving position is first rate and I’d travelled a short distance before it became obvious that the new 2.0 litres diesel engine is more refined and responsive than the 2.1 litre that it replaces. There’s an abundance of power and torque and the smoothness and purity of the delivery of power is impressive, even when pushed on the motorway.

The 9G-Tronic is the world’s first nine-speed automatic transmission in the premium segment for longitudinal applications, and also the first to feature a hydrodynamic torque converter. For the driver of the new E-Class, it is calibrated perfectly providing a super level of comfort and dynamism. As a bonus, it also promises more efficiency resulting in a reduce fuel consumption.

The handling is great too, a big step-up. A mention here for the power steering with a speed-sensitive variable ratio system. You get great high speed stability, and it feeds-back super agility and safe emergency reaction movements as well.

All the time, you have great ride comfort to match the enhanced handling. You could say the new E-Class has real engineering substance to match its obvious style.

Now in its tenth generation – with 13 million units sold since it was first introduced – the E-Class lies at the very heart of the Mercedes-Benz product offering, here and internationally. Despite the rapid expansion in its model offering recently, Motor Dstributors Limited, the Irish distributors expect it will continue to be the largest-selling model here, a position it has traditionally held.

Mirrored in their description of the E-Class as a ‘masterpiece of intelligence’, Mercedes-Benz has set out to give owners a preview of what motoring will be like for future generations. Showcasing a number of features that electronics and mobile technology make possible – some standard, some optional – the new E-Class brings the era of ‘autonomous and accident free motoring’ even closer.

One that every motorist will applaud is a feature that allows the car to be manoeuvred remotely via a mobile phone without the driver being inside – a development likely to appeal to all who ever found themselves hemmed in within a narrow parking space and unable to gain entry to their car.

They Say:
Ciaran Allen, sales manager for Mercedes-Benz passenger cars in Ireland, told me: “Buoyed by an unprecedented level of interest and a bank of pre-launch orders far into treble-digit territory, the new E-Class will play an important role in underpinning the position of Mercedes-Benz as flag-carrier in the luxury segment.   ‘Exceptional in every respect, it will redefine standards in the business-class, not least in its outstanding specifications and highly competitive price-to-value proposition’ he said.

We Say:
The new E-Class is without exaggeration an awesome and near complete car. It delivers on style, genuine comfort, drivability, great refinement, performance, but also on hi-tech features, sublime engineering.

Mercedes-Benz has really raised the bar and put it up to their main competitors. The new 5-Series will have to respond when it is revealed later this year and goes on sale early next year. Audi too have brought forward their next all-new A6 (code-named C8), to go on sale next year too. For now, it’s advantage E-Class and it will take a great car to change that.