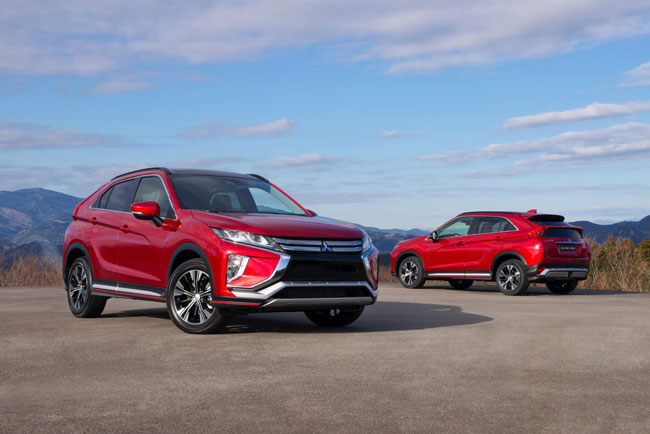 The Eclipse Cross will compete in the C-SUV segment and will appeal to style-conscious drivers its sharp coupé looks and muscular SUV stance, as well as its advanced levels of connectivity and all-wheel control technology which delivers an enjoyable, reassuring feel that elevates the driving experience.
The sharp and dynamic Mitsubishi SUV coupe form is distinguished by its wedge profile with its bold belt-line and strong character line; a forward raked rear window; the sharply truncated rear gate and short overhang; and muscular wings that contribute to an athletic appearance.
The front design of the Eclipse Cross features MMC’s trademark ‘Dynamic Shield’ concept, which refers to the protective shield shape visually formed by the black central area and highlighted by bold brightwork on either side of the grill. Distinctive auxiliary lamps are recessed deep in the front fascia adding drama and sophistication to the SUV’s front-on appearance.
At the rear, the high-mounted, stretched rear lamps divide the rear window into eye-catching upper and lower segments and when illuminated the tubular LED and central LED brake lights form a single bar of light running across the tail, giving the Mitsubishi Eclipse Cross a broad and unmistakable appearance from the rear.
The Mitsubishi Eclipse Cross also heralds the arrival of a new red body colour. The standard coating is layered with semi-transparent red and clear coating, and this creates high levels of colour saturation with a highly-refined finish.
Inside, Mitsubishi says that the new SUV’s dashboard is shaped using horizontal lines, with silver metal frames and a black and silver monotone color scheme helping create a sense of refinement that is both dynamic and sporty. With its table-like infotainment display and new Head Up Display, the futuristic cockpit inspires a sense of excitement for the driver. For maximum comfort and flexibility, the rear seat features a 60:40 split with long slide-and-recline adjustment.
Also on the MMC stand at the Geneva International Motor Show will be the Mitsubishi eX concept, which is the manufacturer’s electric compact crossover show car. The ASX, Outlander and L200 will complete the display.