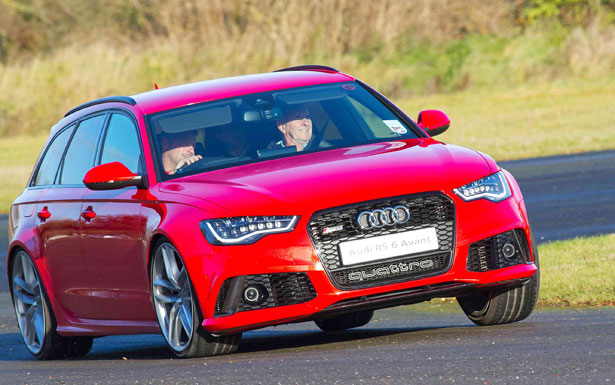 Pioneered by Audi and evolved over 30 years, Audi has developed the right all-wheel drive technology for every Audi vehicle concept. The test driving experience provided guests with the opportunity to understand the quattro permanent all-wheel system and the benefits it has to offer, thanks to the impressive driving dynamics, traction and increased safety that only a quattro can offer.

The Audi RS6 quattro performance assessment gave drivers the opportunity to witness former Austrian rally champion, Stefan Eichhorner put Audi’s most powerful car to the test. This was followed by a grip surface workshop which featured the Audi S3, Q3 and A6 quattro vehicles.

Finally the safety test allowed drivers trial the Audi A4 quattro on simulated ice which demonstrated how the technology intuitively responds when you need better traction in tricky icy conditions or extra grip on wet slippery roads in comparison to a front wheel drive A4.
Display models at the event consisted of a variety of exceptional vehicles including the highly anticipated new 2014 Audi A8, the Future Now exclusive model range and the original quattro rally car owned by Irish rally driver, Pat Horan.
Richard Molloy, Head of Product and Marketing at Audi Ireland commented: “This Audi quattro event is the first event of its kind in Ireland and we were delighted to be in a position to provide our customers, dealers and members of the press with an opportunity to experience firsthand our exciting quattro range in Weston airport and demonstrate exactly what quattro technology is and how applicable it is to Irish motorists.”

Exciting RS6 Avant is an estate of the art of power
I rediscovered the reality of power and excitement last Friday afternoon at Weston Airport when getting behind the wheel of the all-new Audi RS 6 Avant. It took just 3.9 seconds to dispel any doubt that its ultra-efficient new downsized V8 TFSI engine has compromised on muscle for the sake of miles-per-gallon.

The latest super Avant will firmly cement its RS credentials by outrunning its mighty V10-powered predecessor with an exceptional sub-four-second 0-62mph sprint time. At the same time its smaller displacement and cylinder-on-demand technology will make 28.8mpg economy potential a reality.

After catapulting to 100km/h from rest in a best-in-class 3.9 seconds, the RS 6 Avant in its standard form will be capable of continuing to an electronically limited 250 km/h top speed where conditions allow. It will be possible to increase this top speed to 280km/h by specifying the optional Dynamic package, and to go a step further still with the Dynamic plus package, which curbs acceleration only when the new super Avant reaches 300km/h.

Despite straying even further into the realms of the supercar, the latest RS 6 Avant nevertheless manages to register a fuel economy improvement of approximately 40 per cent, thanks partly to an engine start-stop system and innovative thermal management technology, but primarily to the new engine’s cylinder on demand (COD) system.

At low to intermediate loads and engine speeds, it shuts down the intake and exhaust valves of cylinders 2, 3, 5 and 8. The body plays a major role in the handling and increase in efficiency. It comprises roughly 20 per cent aluminium, and a sizeable proportion of components made from high-strength steel. Through the more intensive use of lightweight materials Audi engineers have been able to reduce the weight of the new Audi RS 6 Avant by approximately 100 kilograms compared with its predecessor.

The 4.0-litre TFSI is paired with an eight-speed tiptronic transmission featuring shortened shift times and offering ‘Sport’ and ‘Manual’ modes in addition to the standard ‘Drive’ setting. To shift for themselves drivers can use the shift paddles on the steering wheel or the selector lever, which is of a unique RS design. The lower gears of the tiptronic are tightly spaced for optimum performance, while a tall eighth gear reduces fuel consumption.

The new RS 6 Avant will be the first Audi RS model to feature adaptive air suspension. The specially tuned set-up lowers the body by 20 mm, and incorporates controlled damping which takes into account road conditions, driving style and the mode chosen in the standard Audi drive select adaptive dynamics system, with which the driver can influence the function of key components in multiple steps.

High-gloss, 20-inch, forged wheels in a seven twin-spoke design will be standard for Irish RS 6 models, and three 21-inch cast wheels with either high-gloss silver, polished black or polished titanium-look finish will be available at additional cost.

Numerous RS-specific design details underscore the distinctive appearance of the high-performance Avant. Most noticeable are the matte aluminium applications on the body, the matte black honeycomb radiator grille at the front of the car, the bumpers, the wings, the sill flares and the large roof spoiler. At the rear of the car, the diffuser and the two large, elliptical exhaust tailpipes make a bold statement. Two optional exterior design packages – Matte Aluminium or Carbon – are also available to further customise the look. The new Audi RS 6 Avant is available in eight exterior colours, including the exclusive shade Daytona Grey matte.
RS sports seats with pronounced side bolsters, integrated head restraints and RS 6 logos will be standard. The seats are covered in high-grade, honeycomb-quilted valcona leather in either black or Moon Silver. As befits the ultimate incarnation of the A6, the RS 6 Avant will feature a generous list of standard equipment, including xenon plus headlights, LED rear lights, a tyre-pressure monitoring system, metallic paint, head up display, illuminated entry sills and the RS-specific driver’s information system. Also on board will be the parking system plus with visual and acoustic prompts, cruise control, four-zone automatic air conditioning, MMI navigation plus with MMI touch, BOSE sound system and Audi Music Interface (AMI).

The RS6 that I had the pleasure of powering down the runway and taxi-ways of Weston airport had many optional extras fitted, which pushed the price-tag closer to the €160,000mark. Key options available will include all-LED headlights with a unique design, ceramic brakes, sports suspension plus with Dynamic Ride Control (DRC), the Dynamic packages and practically every other high-end option available in the range. The list includes night vision and a portfolio of high-performance driver assistance systems, as well as the Bang & Olufsen Advanced Sound System with 15 speakers and 1,200 watts of total power. Mobile phone preparation – High, with Audi connect – the perfect complement to the MMI navigation plus – will also be available to deliver web-based services to the car.