Audi has introduced its new e-tron, which Audi says is an SUV with three different methods of energy recuperation combined in a single vehicle for the first time.

With manual coasting using the shift paddles, automatic coasting via the predictive efficiency assist and brake recuperation, the Audi e-tron is built for intelligent energy restoration; allowing the SUV to attain up to 30 per cent of its range through this process.

Henning Dohrn, Director, Audi Ireland said, “The e-tron represents yet another milestone for the brand as we offer Irish customers our first state-of-the-art fully electric model. The new Audi e-tron will offer real-world efficient driving solutions together with technology and design features that define Audi as a leading automotive brand”.

The electric SUV recovers energy in two ways: by means of coasting recuperation when the driver releases the accelerator, or by means of braking recuperation when the brake pedal is depressed. In both cases, the electric motors function as a generator and converts the kinetic energy of the Audi e-tron into electric energy. This allows the battery to recover energy in practically all normal braking maneuvers which Audi says makes the system the most efficient on the market.

If the brakes are applied at a speed of 100 km/h, for example, the Audi e-tron can recuperate electric power that corresponds to more than 70 per cent of its energy input. This means that the electric SUV comes close to the level of a Formula E racing car in the 2018/2019 season in terms of its efficiency.

While driving downhill, the Audi e-tron can recover almost all the energy it generates by means of recuperation. The electric SUV is capable of achieving long range distance even whilst driving in mountain ranges. The driver can adjust the degree of coasting recuperation via paddles on the steering wheel or select automatic mode in Audi’s MMI infotainment system. 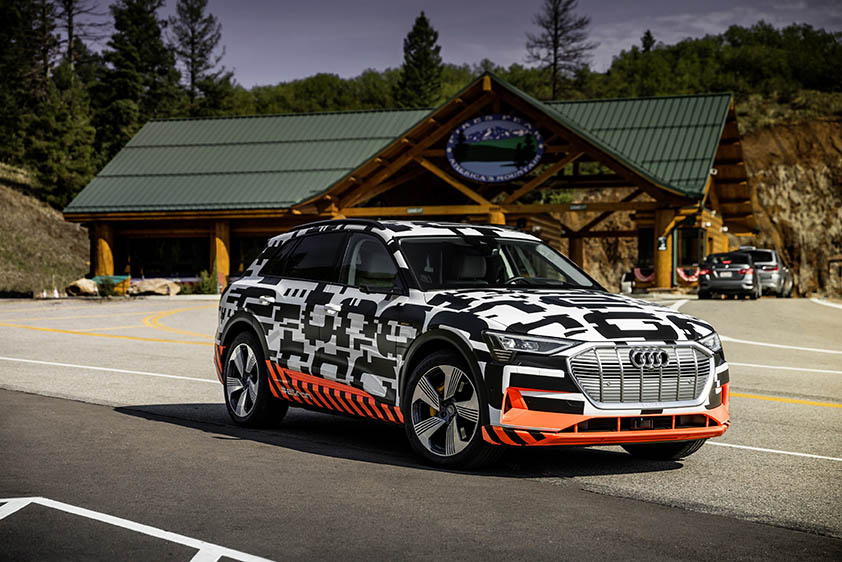 The Audi e-tron prototype on recuperation test at Pikes Peak

If the driver has selected the automatic recuperation setting using the MMI, the system determines the ideal deceleration for the particular situation and recuperates energy in a way that is optimally adapted to the environment.

Audi says it is also the first manufacturer worldwide to use the electro hydraulically integrated brake control system technology in a series production vehicle with electric drive. Thanks to its compact design, this system weighs less than six kilograms, making it roughly 30 per cent lighter than a conventional brake system. The electric SUV decides whether to decelerate using the electric motor, the wheel brake, or a combination of the two depending on the driving situation.

It’s during full-stop braking that the powerful properties of the integrated brake control system really stand out. The control unit detects how much force the driver is using to depress the brake pedal and calculates how much braking torque is needed within milliseconds.

The transition between electric and hydraulic braking is smooth and homogeneous, so the driver does not even notice it; the brake forces remain constant. A second piston generates the familiar pedal feeling for the driver’s foot.

The new brake control system builds up pressure for the wheel roughly twice as fast as a conventional system. When automated emergency braking is performed, there are only 150 milliseconds – ever so slightly more than a blink of the eye – between the initiation of the brake application and the presence of maximum brake pressure between the pads and disks.

Thanks to this rapid pressure build-up, the electro hydraulically integrated brake control system shortens the braking distance by up to 20 per cent compared with a conventional brake system, according to the company.

The Audi e-tron recently underwent a recuperation test at Pikes Peak in Colorado Springs with impressive results. At 4,302 metres, Pikes Peak looms high in the southern Rocky Mountains and is the scene of legendary German rally driver Walter Röhrl’s world famous hill climb in the Audi Sport Quattro S1 back in 1987. On its 31 kilometre downhill drive, the electric SUV feeds so much energy back to the battery that it can cover approximately the same distance again.

The Audi e-tron will be sold across the entire Audi network and will be available to order from all local Audi Ireland dealerships from early 2019. Customers can avail of a fully refundable deposit initiative reserving priority access to the Audi e-tron.