The Ferrari F2004 – one of the most dominant cars in Formula One history – is set to take pride of place on the main Ferrari feature at Europe’s biggest pre-season motorsport show, Autosport International.

Winning 15 F1 races throughout the 2004 season, the F2004 claimed a record-breaking seventh World Championship for Michael Schumacher with teammate Rubens Barrichello finishing the year in second place. The legendary driver also won a single-season record of 13 races, breaking his own record of 11, as Ferrari collected the Constructors’ Championship with ease. 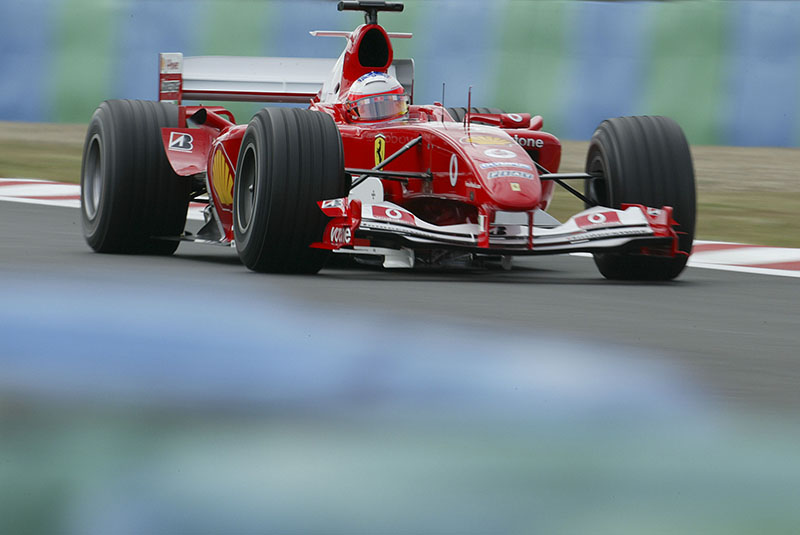 To this day, the F2004 still holds the lap record for seven circuits around the world, including five of the tracks still used in F1 today. It also won 12 pole positions between the successful driving pairing of Rubens Barrichello and Michael Schumacher.

Its 3.0 litre V10 engine was capable of close to 1000bhp, while subtle changes to the design around the rear of the car were made by Ross Brawn, Rory Byrne and Aldo Costa. The rear wing was made larger, the rear suspension was redesigned to reduce excessive tyre wear and the exhausts were made smaller, all for aerodynamic benefits.

The car joins the Ferrari FXX-K Evo, Ferrari 488 Challenge and a 488 GTE on the main Ferrari feature and is the first representative of the exclusive F1 Clienti programme.

The main Ferrari feature at Autosport International is set to showcase the range of cars available through Corse Clienti, Ferrari’s exclusive client racing programme, from Challenge car to GT car, through the XX development cars to Formula One. Corse Clienti can, uniquely in the automotive world, take an owner via its Corsa Pilota programme from a 488 GTB through the Ferrari Challenge series to Le Mans, or the XX development cars through to even owning and driving a Scuderia Ferrari F1 car.

Further information about the other cars on the Ferrari main feature and drivers will be announced in due course.

Autosport Media UK Editor-in-Chief, Andrew van de Burgt, said: “The Ferrari F2004 is one of the most iconic Formula 1 cars in the sport’s history. It was the car with which Michael Schumacher his won his record-breaking seventh title and is a beautiful machine with an exceptional history. The Ferrari feature is already set to be a fantastic spectacle for visitors to the show, so make sure you don’t miss out on this amazing celebration of the ultimate motorsport marque.”

The event is part of Motorsport Network’s UK title Autosport – one of the world’s leading print and online motorsport publishers.
Motorsport Network is the world’s largest independent automotive and motorsport-related digital platform, connecting millions of people who love motorsport and cars. The network also creates key industry events including Autosport International and the annual Autosport Awards.
Autosport International will take place at the National Exhibition Centre (NEC) Birmingham, from January 11-14.