The new third generation Kia Ceed has been launched and will be on sale here in August. Prices will start at €22,695 and there are four trim levels with the price rising to €28,595 for the top specification.

The new Ceed has been designed, developed, engineered in Germany and is also being built in Slovakia, so it is an all European car. It strengthens Kia’s presence in the European C-segment with a mature and athletic new design, innovative new technologies, and a more engaging drive.

Since the first-generation Kia cee’d started production at Kia’s new Slovakian manufacturing facility in December 2006, more than 1.28 million units have been built. Interestingly a new naming format is part of the change of model, with the current apostrophe version of cee’d set to become Ceed. This stands for ‘Community of Europe, with European Design’, and Kia says that the new model further consolidates its reputation. And Kia expects that the new Ceed will account for an even greater proportion of Kia’s European sales.
The new model is longer and wider with sharper lines than the outgoing model. It also features a more dynamic and sporty design. The interior has also been upgraded with a lower driving position giving more headroom and the boot space has grown.

So has the Ceed Sportswagon with a luggage space that is greater than the Skoda Octavia Combi. The SW version is 25cm longer than the current model.

A shooting brake version (the style of a coupe/sports car with the practicality of a hatchback/ estate) for more upmarket option will follow late this year. There will also be a GT Line version by the end of the year and the new Ceed GTi will be launched at the Paris Motor Show in October. Important news from Kia is that “electrification” will be part of all future models. The Ceed will get a mild hybrid pack to cut down on fuel consumption and CO2 emissions. So expect hybrid, EV, and plug-in EV versions across the model range, while staying with internal combustion engines.
The steering and suspension have been upgraded in the new Ceed, and this results in less body roll, a great balance between enhanced comfort and improved drivability with a more direct steering feedback. Cabin noise has been reduced and it contributes towards a more refined driving experience. 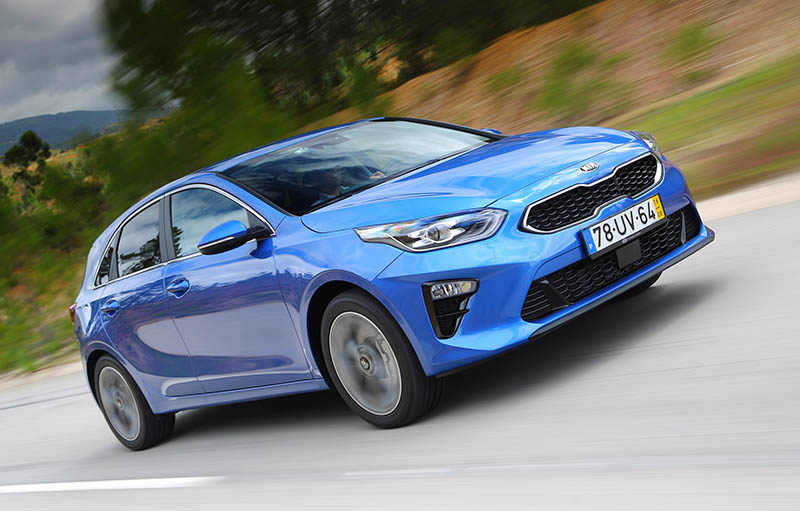 Inside the cabin, the Ceed is more ergonomic than ever, and with higher-quality materials used throughout. The cabin architecture from the most recent Kia vehicles has been adapted for the new Ceed, Driver-centric in its layout, the centre console is angled slightly towards the driver’s seat for ease of use on the move.

Besides looking great inside and out, the new Ceed offers a good value spec, the new Ceed has the advantage of 7 years or 150,000-kilometre factory warranty, which instills great consumer trust, and it also offer affordable maintenance costs.

Kia expects that petrol engines will account for 70pc of sales and options include an updated version of their popular 1.0-litre T-GDi (turbocharged and direct injection) engine. The engine produces 120ps and 172 Nm torque, with emissions from 125 g/km, or 122 g/km with the optional ECO Pack (WLTP combined, converted back to NEDC 2.0). A new ‘Kappa’ 1.4-litre T-GDi power unit replaces the earlier 1.6-litre GDI engine and produces 140ps, 4% more than its predecessor despite its lower displacement.

In 2019, the new Ceed will be available with Kia’s new ‘EcoDynamics+’ 48-volt mild-hybrid technology, to further reduce CO2 emissions. The ‘EcoDynamics+’ powertrain supplements acceleration with power from a 48-volt battery, while a new ‘Mild-Hybrid Starter-Generator’ unit extends engine ‘off time’ with a ‘Moving Stop & Start’ function.

Even with the new Ford Focus, Opel Astra and Volkswagen Golfs on the way this year too, I expect the new Kia Ceed to be a hit with Irish motorists in a segment that is loosing sales to crossovers/SUVs. Having driven all available versions of the new Ceed at the European press launch, I expect Kia Ireland will indeed achieve 1,000 Ceed sales next year. Check it out for yourself when it gets here in August.