Kia e-Soul is Continental Irish Car of the Year 2020

At an awards ceremony last night at the Westin Hotel in Dublin, the Kia e-Soul was named as the Continental Tyres Irish Car of the Year for 2020.

It is the first time that an electric car has won the Irish Car of the Year title. 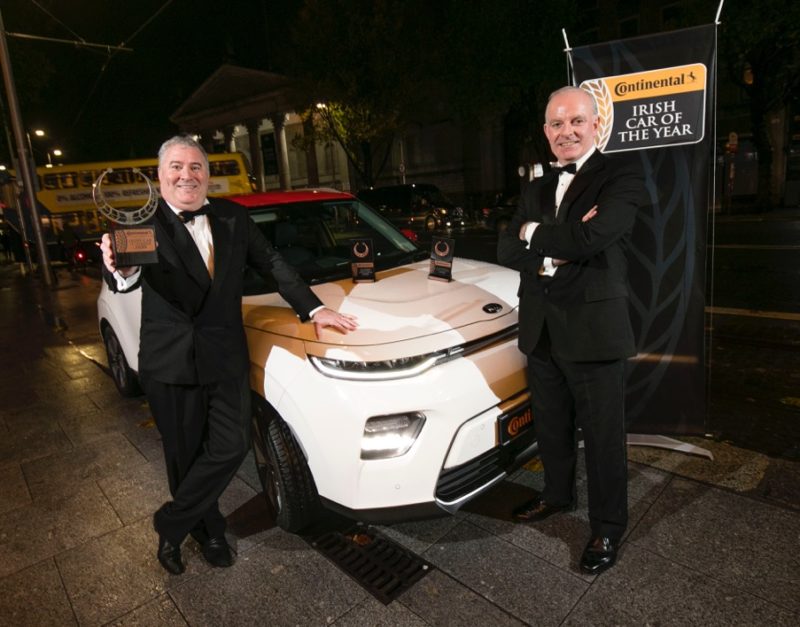 Having won in each of their categories, the ten category winners were all in the running for the top honour with the judging panel of some 32 journalists electing the Kia e-Soul by a slim margin. Last year’s 2019 Irish Car of the Year award was won by the Volvo XC40.

Joint-Chairman of the Irish Car of the Year Committee, Bob Flavin said: “This is the first time that an electric car has won Irish Car of the Year, a real sign of things to come I think. Regardless of its fuel type, the e-Soul came out as the clear winner and was hugely popular with my motoring journalist colleagues.”

Tom Dennigan of Continental Tyres said about the awards: “The advice of the Irish Car of the Year jurors is instrumental in helping consumers here to make sense of the ever-growing complexity of the cars we drive – both from the point of view of the increased fuel options and the myriad of new safety features and technologies that are found on even the entry level models of all brands.”

The newly appointed MD of Kia Motors Ireland ,Ronan Flood commented: “Right from the start we have received really positive feedback from journalists after they had driven e-Soul particularly in regard to build quality, driving dynamics, comfort and of course the 400km plus range on a full charge. Credit for this of course goes to our designers and engineers in Korea who are of course also responsible for our e-Niro model”

The Kia e-Soul launched earlier this year is a high spec, high tech EV with a range of 452kms with a distinctive, dynamic and innovative exterior and an interior packed with comfort, safety and infotainment equipment. The e-Soul is available with two trims and one long range (64kw/452kms) power plant. Both trim levels are generous, featuring 10.25 inch touchscreen AV/Nav display and seven inch supervision cluster and safety features including Lane Keep Assist, Smart Cruise Control and Front Collision Avoidance.

Additional features on the K3 version include full leather trim, Harmon Kardon Sound System, Heads Up Display and Blind Spot Detection. The K2 version is available at €35,995 and the K3 at €37,495 both prices including VRT relief and government grants.