Posted on September 8, 2014 by Padraic Deane

Mazda has confirmed that it will be continuing its long term support of Connacht Rugby by becoming Official Car Sponsor.

Mazda has committed to a significant investment in Connacht Rugby as car sponsor, including providing a fleet of over 55 Mazda cars to the Connacht Rugby team. 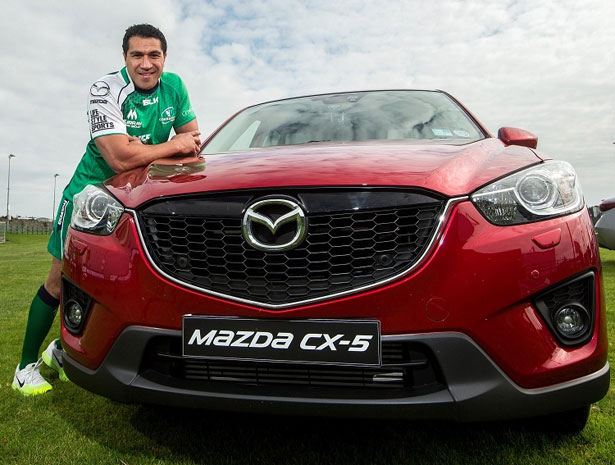 For updated information on locations and dates, please keep an eye on www.mazda.ie or www.facebook.com/mazdaireland.

Mazda has also confirmed that legendary former All Black centurion and recently signed Connacht Rugby player Mils Muliaina has been appointed as the official Mazda Ambassador for the 2014/2015 season.

Commenting as the new Mazda Ambassador Mils Muliaina said: “I am delighted to have been appointed as Brand Ambassador for Mazda Ireland. I have lived and played in both New Zealand and Japan where the Mazda brand is hugely popular so this is a great honour and I believe they have been an excellent partner of Connacht Rugby for some time now. I love my new Mazda CX-5 AWD and I’m really looking forward to driving it around Ireland as well as working closely with the Mazda team over the coming year.”

According to Tony Howarth, Managing Director, Mazda Ireland, “Mazda Ireland is delighted to be the Official Car Sponsor of Connacht Rugby and continuing our long term support of the team. We are also very excited about the arrival of Mils Muliaina to Connacht Rugby and his commitment to Mazda as an ambassador. Mils is one of the most powerful rugby players in the world and with Mazda’s SKYACTIV engines which offer no compromise on power and performance, it’s a strong fit. The passion and drive of Connacht Rugby is very exciting and reflects Mazda’s ambitions in the Irish market place. We are thrilled to be continuing our support of Connacht Rugby and we are looking forward to an action packed rugby season ahead.”