Audi pioneered this premium compact segment, and this is now the third generation of the highly successful A3 family which was launched initially in Ireland in 1996. Renowned for its supreme build quality, good looks, efficient engines and generous equipment levels, the A3 remains highly sought after by both new and used buyers and the improvements made to the new generation ensures this model will be no different. Over its production life to date, the A3 range has represented over 20 per cent of total Audi sales, establishing itself as a steadfast pillar of the brand’s success. 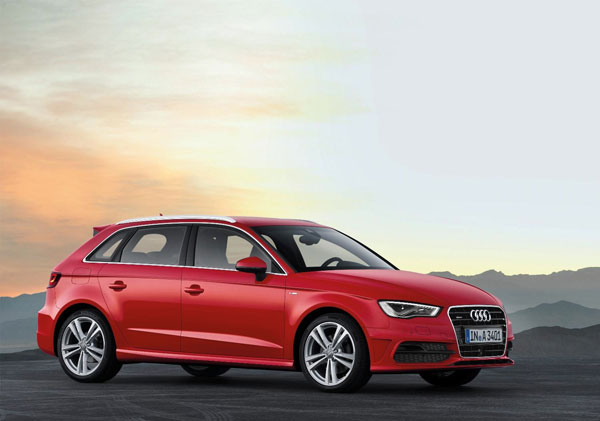 In Ireland, over 11,000 customers have made the A3 the number one car in the premium A-segment and the Audi A3 Sportback is the most popular variant of the A3 family making up 60% of total sales.
With a Golden Steering Wheel 2012 award in the new A3 Hatchback’s trophy cabinet, Audi says that the A3 Sportback continues in this formula and is destined for success in the automotive press world.

CO2 emissions of as little as 99g/km in the new A3 Sportback have been made possible with the help of ‘Audi ultra’ lightweight technology, which has enabled it to tip the scales an impressive 90 kg lighter than its predecessor. The aluminium front wings and bonnet help in this regard, and contribute to a class-beating kerb weight of just 1,205kg for the 1.4 TFSI model.

In addition to the 1.2 TFSI 105, the new Audi A3 Sportback will launch with three other four-cylinder engines, all of which are essentially new developments. The 1.4-litre and 1.8-litre TFSI engines and the 1.6-litre TDI and 2.0-litre TDI have outputs of 125 bhp, 180 bhp, 105 bhp and 150 bhp respectively. Audi says that compared with the previous model, they offer fuel economy improvements averaging 10 per cent.

The 1.8-litre TFSI is linked as standard to a seven-speed S-tronic twin-clutch transmission; the 1.4-litre TFSI and 2.0-litre TDI are mated to a six-speed manual gearbox. The 1.6-litre TDI engine features emissions as low as 99g ensuring it is the most fuel efficient engine in its class. All engines in this first phase drive the front wheels; quattro permanent all-wheel drive – and further engines, including a 1.4-litre TFSI with innovative cylinder on demand technology – will follow later in 2013. Watch this space for a test drive review in 2013.