The new Mercedes-Benz A-Class – seen as the car that will give Mercedes-Benz access to a new, younger generation of motorists – is here and first models will appear in dealer showrooms during December ahead of the January registrations rush.

Two models will take centre stage initially – one is an A180 petrol version which comes on the market at €26,435 (ex works) and the other an A180 CDI diesel version at €28,550, the version likely to attract most attention due, in part, to its greener CO2 emissions of just 98g/km.

Both models will come in a choice of three specifications and equipment lines – Style, Urban and Sports Pack. Entry models sold here come equipped with Style Pack features that include items which, were they purchased separately, would have a value of €1,600. 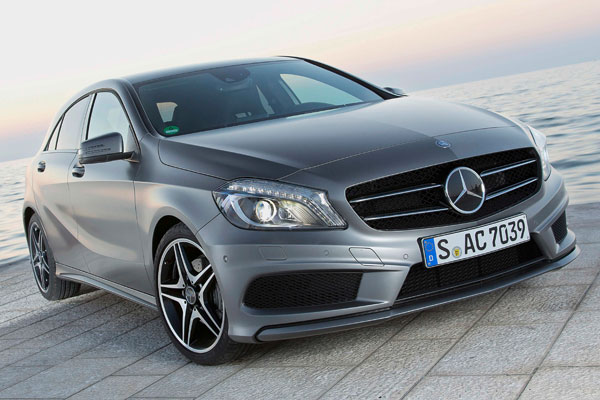 Compatible with the needs of the iPhone, iPad generation, its optional on board high-tech functionality is such that iPhone Siri voice-activated units and iPad music and Apps can be played through the car’s infotainment system.

The new A-Class is as different from its predecessor as it is possible to be. Sitting some 18cm closer to the ground, its low-slung posture and SL-like fascia give it a positively sporty appearance that will appeal to young male and female motorists alike.

Front-wheel drive, all engines have an idle-stop system as standard, linked to a 6-speed manual or 7-speed dual-clutch automatic transmission. New four-link rear suspension has a range of settings that includes an optional sports setting with direct steer.  Collision Prevention Assist, Attention Assist, Adaptive Brake Assist and Brake Hold are all part of its standard safety features.
Since it first appeared at the Geneva Motor Show earlier this year, worldwide interest in the new A-Class has been intense so much so that a backlog of orders already exists. Here in Ireland, Mercedes-Benz passenger car sales manager Ciaran Allen expects supply to keep pace with demand in the initial phases, at least.

“In keeping with its high-tech image, our launch plan will include a heavy concentration on Facebook and smart phone App technology to create an ‘interactive platform’ whereby prospective customers can learn about the A-Class and scroll through its features to model the version they like best” Mr. Allen said.

Already something of a ‘wunderkind’ in terms of its environmental features, the A-Class 180 CDI is acknowledged by the German TÜV organisation as offering fuel savings of up to 26 percent, emissions as low as 98g CO2/km, a best in class CD value of 0.27 and petrol engines that comply with Euro 6 emissions standard. Indeed, over its entire life cycle from production to recycling, it is estimated that the A-Class, in the guise of the A180 BE version, will produce 5.7 tons less emissions than its predecessor and meets the stipulated recycling rate of 95 percent by weight.