Mercedes-Benz has revealed the latest version of the C-Class, which is due here in Ireland in September.

According to the German brand, the Mercedes-Benz C-Class has sold just under 11 million units since its launch three decades ago – as successor to the old 190 model. 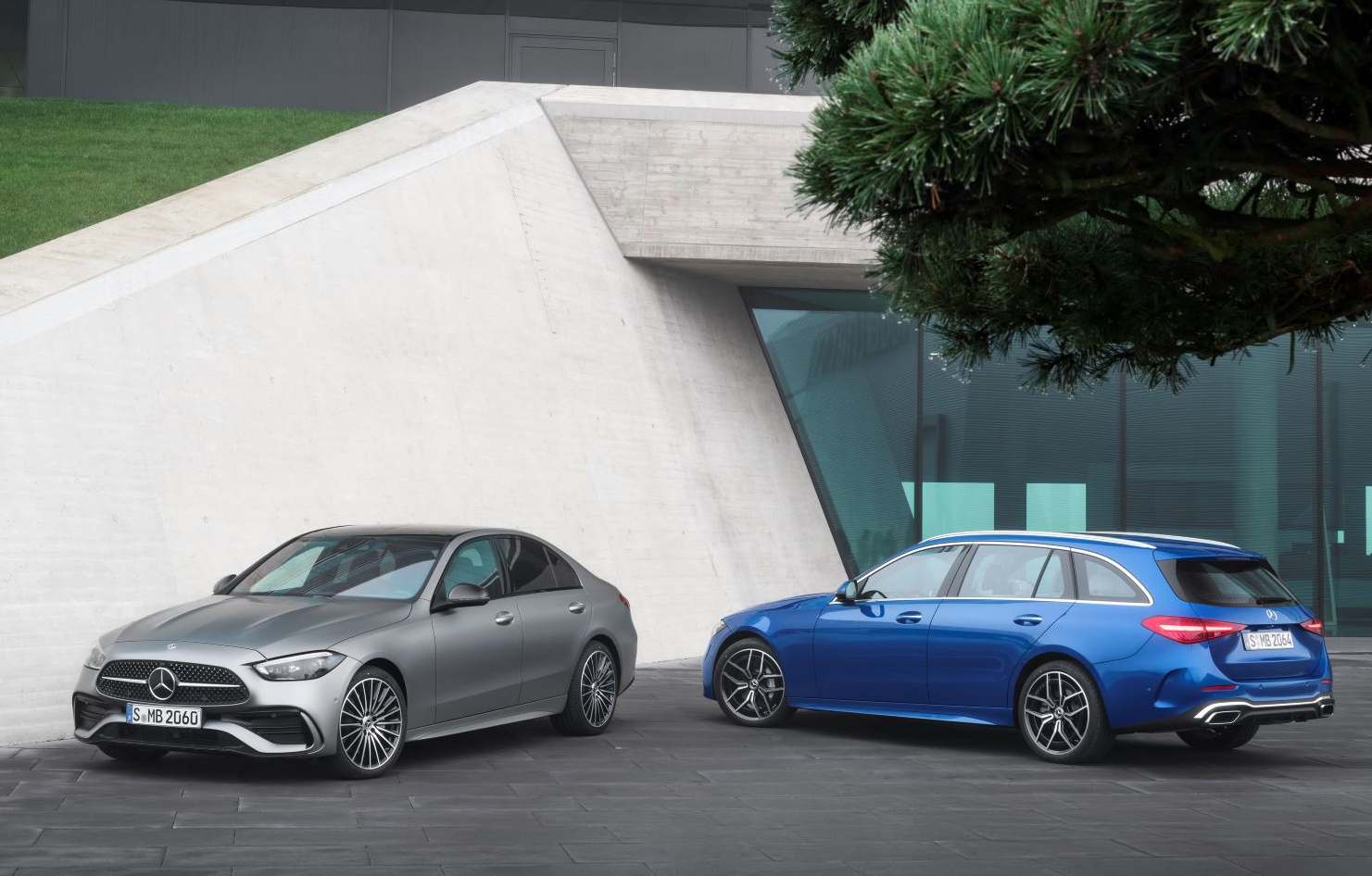 Five petrol and three diesels are available at launch, all with four-cylinder, turbo charged engines and 9G-Tronic automatic transmission.

Plug-in hybrid versions with an electric range of around 100 kilometres will follow, the brand says.

In Ireland, Mercedes says models most likely to appeal to owners are the C 180 and C 200 d. Prices will be announced closer to its arrival date in September.

Comparing it to its predecessor, Ciaran Allen, sales manager for Mercedes-Benz passenger cars, says: “In all but name, the new C-Class is pure S-Class in so many respects.

“Coming immediately behind the flagship model, it raises the bar beyond what owners might have expected from a first-tier offering in the luxury segment. In that regard, it sets a new benchmark for Mercedes-Benz itself and others.”

In its latest version, Mercedes says the C-Class has taken another leap forward in terms of its importance to the brand – evident by the presence in it of features just recently introduced in their flagship S-Class range. Items falling under that umbrella include the latest generation MBUX infotainment system, optional rear-axle steering and the comprehensive electrification that powers its various elements.

Redefining its significance also is the claim by Mercedes-Benz that, in its new form, C-Class is ‘the most stylish and exclusive ever’ thanks to its aesthetics, sporty proportions, and extraordinary interior ambience – characteristics seen in its rear spaciousness, interior ambience and high-quality workmanship. 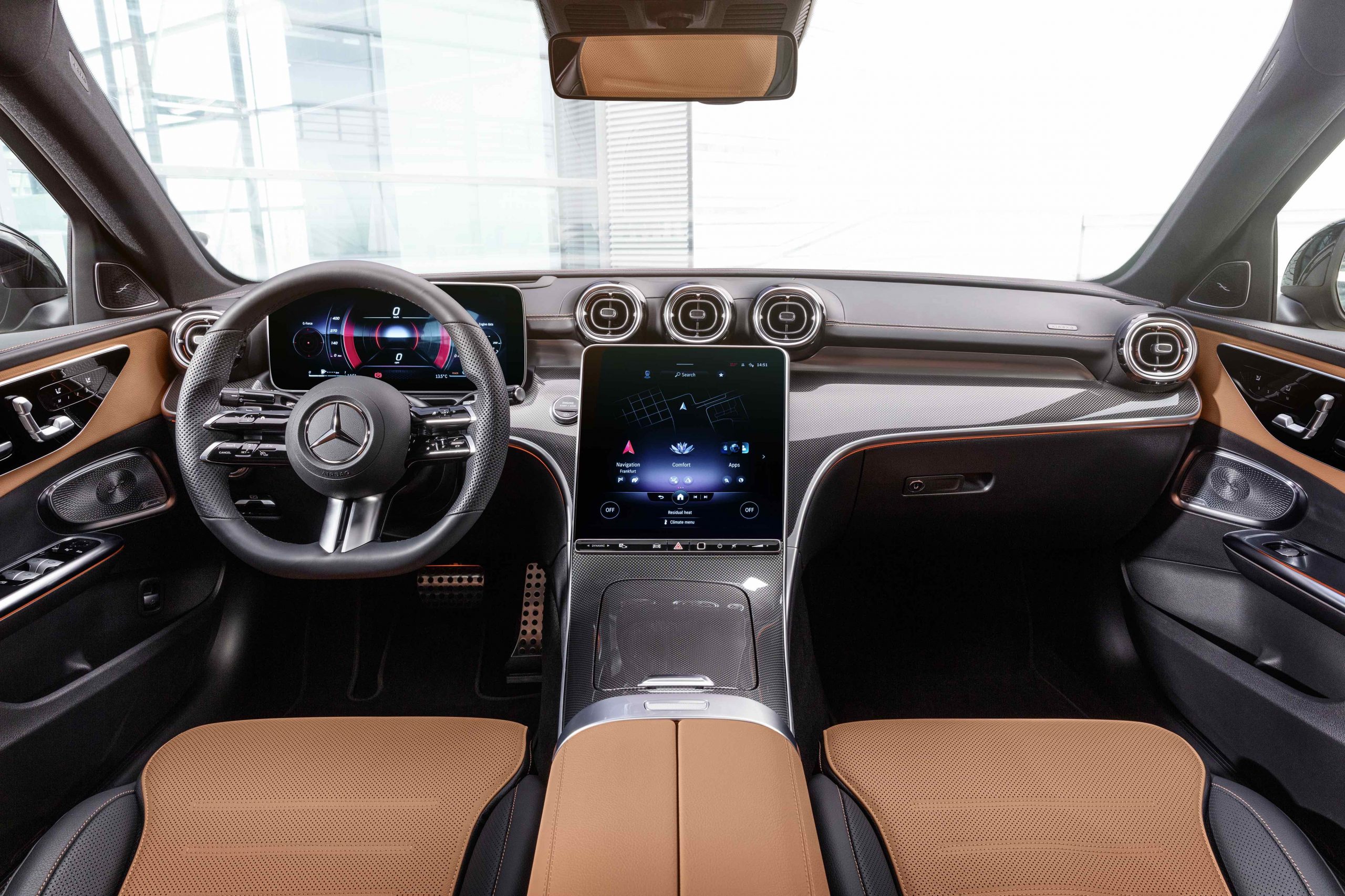 In saloon and estate models, its short front overhang, long wheelbase and rear overhang reflect its dynamic proportions, accentuated by a sporty bonnet with power domes. In what Mercedes calls its ‘cab-backward’ design, windscreen and passenger cell have moved gently towards the rear.

From the side, its sculptured surfaces – with lines reduced to a minimum – light effects accentuate its shoulder line. In estate models, its roofline combines with an inclined rear window to give it an added sporty appeal, seen also in its wide track and flush 17 –19 inches wheels.

In front, all models have a central star with louvers whose design varies slightly from base model to the AMG Line version diamond pattern grille. Rear design is typically Mercedes-Benz with redesigned lights. Three new colours – spectral blue, high-tech silver and opalite white have been added.

Features and focal points include a dashboard covered with man-made leather with nappa-look beltlines and new veneers in brown and black tones. Most evident is the latest -generation MBUX and ‘Hey Mercedes’ multimedia and voice-activated assistance systems with touch screen functions.

Bringing even more digital and intelligent support to driver and passengers, information is conveyed on a split wing-like section with screens that can be individualised in Navigation, Assistance and Service modes and in three display styles, Discreet, Sporty and Classic.

Longer and wider, saloon and estate models are considerably larger than before, according to Mercedes. A 25 mm longer wheelbase increases comfort for front and rear passengers. The drag coefficient of its predecessor is retained despite its larger dimensions. Beneath the retractable cover in estate versions, height and length of the load compartment have been increased with an extra 30 litres boosting capacity to 1,510 litres – helped by 40:20:40 split folding rear backrests with push button operation. Electronic tailgate operation is also standard on estates.

We’re told that the latest generation driving assistance features deliver more comfortable and safer driving with functions that include distance assist, steering assist, lane keeping assist, and a feature that can detect and raise the body height in anticipation of an impending collision.

Improved surround sensors give the driver even better support when parking and manoeuvring at low speed while emergency braking functions protect other road users. An optional trailer-driving feature delivers precise and safer usage on estate models.

High Performance LED headlamps are standard while the optional items catalogue includes a host of passenger comfort, safety and wellness features already familiar in the S-Class and other Mercedes-Benz models.