Back in 1990 Renault launched the first Clio. Do you remember the hugely successful and compelling ‘Nicole and Papa’ Clio series of television advertisements back in the 90s.?

Well in the interim, it has taken more than great advertisements to help sell over 12 million Clios over three generations of this stylish superminis. Now, twenty two years later and the new and really smart looking fourth generation new Clio will go on sale soon.

And it boasts an all new sensual look where Renault has boosted this model’s hallmark strengths to deliver a car that seeks to win over new customers. It is a stylish that oozes attractiveness and it offers great versatility among its key selling points.

The new Clio champions Renault’s new design identity, which the French carmaker explains – places the emphasis on simplicity, warmth and sensuality, but in plain language, the sleek exterior look is a bit of a head turner.

Following its eagerly-anticipated world debut at the Paris Motor Show, Renault Ireland has released pricing and specification for one of Ireland’s most popular cars. 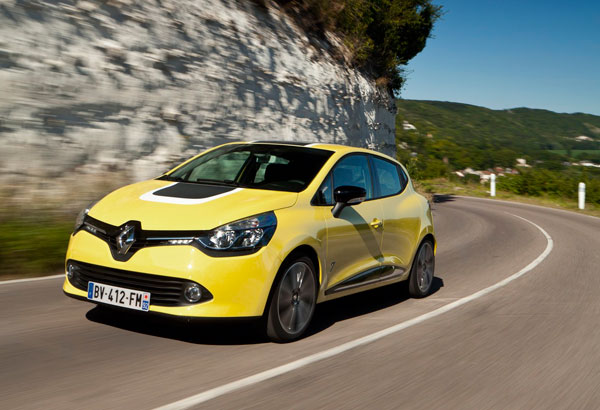 The new model comes with an attractive entry level pricing of €14,990 for the Clio Expression model, available with the 1.2 16V 75 bhp engine. Road tax for this version is currently €225 per annum.
It also is well endowed with new technology, and a further wide array of new options and state-of-the-art engines. Renault have ambitions to put their brand and the new Clio at the top of the hotly contested supermini class.

And breaking with tradition, the new Clio will be available solely in five-door guise, but with a coupé-like silhouette incorporating hidden rear door handles and a sportier profile.

Renault Ireland point out that far from the new Clio Expression being a stripped-out base version though, which it boasts is in keeping with it’s reputation for providing well-equipped models.

New Clio boasts a spacious and comfortable interior, with large and practical boot (300 litres). It is also rigorously designed, achieving the highest possible level of active and passive safety (5 stars Euro NCAP new rating, best in class in three out of four categories) and is built to Renault’s exacting quality standards.

In terms of safety, Renault says that it is committed to achieving very high standards of active and passive safety when designing the new Clio.
It incorporates passive safety on three fronts – adult protection, child protection, and pedestrian protection. It then has a nicely named communicative chassis for enhanced active safety. And the new Clio does not rest on its passive safety laurels and can also claim a number of solid advantages in terms of handling, road holding and braking, thanks in part to its longer wheelbase and wider track.

To combine low fuel consumption and driving enjoyment, the New Renault Clio line-up features an extensively renewed range of petrol and diesel engines. The new Energy TCe 90 petrol engine is the first three-cyclinder engine to be produced by Renault and combines particularly low fuel consumption and CO2 emissions with punchy response.
The latest-generation Energy dCi diesel engines have also been extensively revised and the introduction of a new 90-horsepower version of the Energy dCi is equipped with Stop&Start technology. Emitting only 83g/km, this diesel engine is the most economical in its class with the lowest CO2 emissions and only €160 annual road tax. It also looks destined to remain in the lowest new Band A classification for VRT and road tax.

Julien Lelorrain, Marketing Director, Renault Ireland, told the Auto Trade Journal: “New Clio embodies the renewal of Renault Design as part of an approach based on sensuality and warmth.  New Clio allies a head turning design, come with economical engines, highest level of safety with 5 stars Euro NCAP and yet at very affordable price starting from €14990 or €149 per month with Renault Finance for a rather well equipped Expression Trim level. New Clio is the perfect car for those looking for a beautiful yet affordable car”.

The appeal of the new Renault Clio comes first from the stylish three-door design that combines so well with the functionality of a five-door car. Check out for yourself the substance that matches this style.