Renault has unveiled the newly face-lifted Fluence, which features a new styling identity, similar to that of the recently launched fourth generation Clio. Its front end has the vertically-set logo at the centre of a broad black strip picked out by chrome beading which provides the car with a dynamic stance. The LED daytime running lights and chrome/gloss black inserts also contribute to the newcomer’s modern appeal. 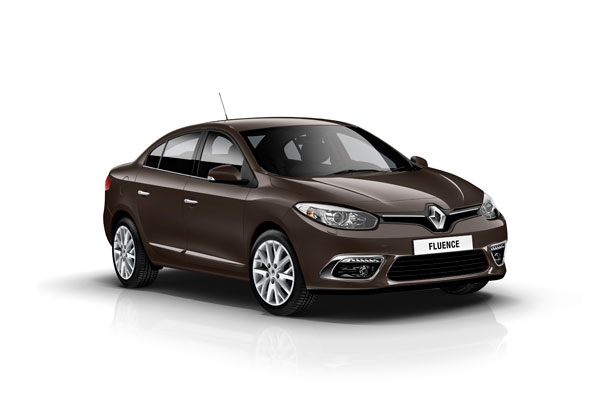 The design of the new Fluence interior is also more modern, including digital instrumentation for all versions. The boot is still one of the biggest in its class easily fitting two full sets of golf clubs. The cabin is also as roomy as ever, and Renault boasts that it has been enhanced by the use of new upholsteries for segment-topping comfort.

The new Renault Fluence has a raft of on-board, connected technologies and innovations including numerous driver-aid technologies – Bluetooth® compatible radio, six airbags and hands -free card with remote central locking standard all across the range, LED lights, rear parking sensors, cruise control, dual zone climate control and a brand new multimedia system available depending on trim level. From the basic equipment level up, all versions are ‘connected’ thanks to the availability of new Bluetooth radios equipped with USB and jack sockets.

At the higher-end of the range, the new Renault Fluence features a major innovation in the form of the Renault R-Link multimedia system which will provide connected services and is ideally suited to motoring use thanks to its touchscreen display and voice commands. Renault R-Link also incorporates the navigation system and telephony function and can be connected to portable music players. In a second step to come soon after the launch, it will also provide access to R-Link Store’s catalogue of automotive applications that can be downloaded in the same way as smartphone applications. R-Link will be available for sale in early 2013.  New Fluence comes with a five year unlimited mileage warranty, so easy to see why families, fleet and taxi drivers have all chosen Fluence over competitors.

Renault Finance also tells us that it will offer finance packages on the new Fluence from €199 per month with Renault ReFlex, a Personal Contract Plan (PCP) which provides Irish consumers with Reassurance and Flexibility when financing a new Renault.

Julien Lelorrain, Marketing Director, Renault Ireland told the Auto Trade Journal: “Fluence has been a hit in Ireland since launch over 2 and a half years ago and this new look model will certainly enhance its appeal to the Irish customer. The new front end design and sleek lines make New Fluence stand out amongst its category competitors. The fuel efficient diesel engine with lowest tax at €160, 5 year unlimited mileage warranty and the ReFlex finance solution from €199 per month make New Fluence a very attractive 2013 purchase.”