Suzuki has unveiled the new ‘Across’, the first electrified vehicle from the brand. It is based on Toyota’s RAV4. The Japanese manufacturer describes it as a robust and sporty SUV equipped with a sophisticated plug-in hybrid system and E-Four electronic 4×4. It adds that it delivers uncompromising performance and efficiency with the capability and styling of a full-fledged modern SUV. 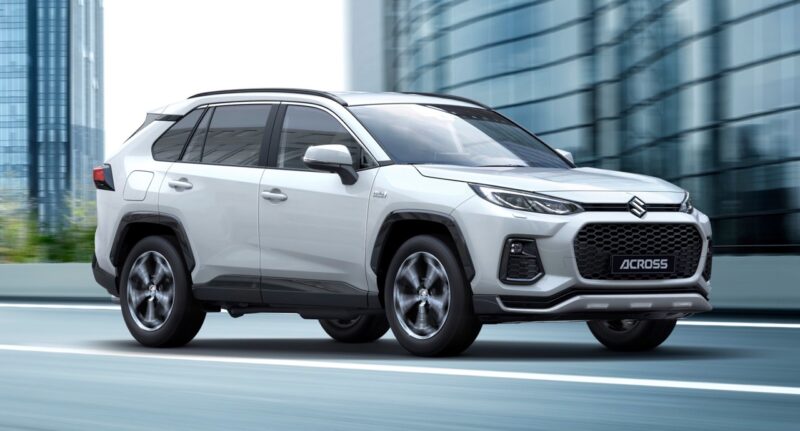 The Across is the first model supplied from Toyota Motor Corporation under the collaborative business agreement between Toyota and Suzuki.

Across sales are set to start in Autumn of 2020 in Europe, but no price has been announced yet. It will be more expensive than the Vitara but probably a little under Toyota’s RAV4 pricing.

A derivative of the Toyota Corolla is expected to follow also follow later. It is expected to be built at Toyota’s Derbyshire plant in the UK, but the outcome of Brexit negations may determine that.

Both brands announced in March that they intended to expand their collaboration in new fields after agreeing to pool their expertise to develop alternative fuel vehicles (AFV) and compact cars.

It features an impressive SUV design, which bears a strong resemblance to the Toyota RAV4, except for the new front-end. Suzuki points to a robust polygonal body that combines characteristic SUV toughness and a sporty front face featuring a large open grille. Further features include sophisticated LED headlamps with a bi-beam projector (combining low and high beams) and an LED DRL, and premium quality 19-inch alloy wheels with black gloss coating and a distinctive polished face.

It will be powered by a highly sophisticated plug-in hybrid system that Suzuki boasts delivers superior fuel efficiency and low CO₂ emissions, with quick response and smooth acceleration.

It adds that the Across is equipped with the E-Four electronic 4×4 system, which ensures efficient and effective 4×4 performance for confidence inspiring handling and control even in slippery conditions.

Suzuki says that the interior environment of the Across has been designed to evoke a sense of comfort, luxury and driving conﬁdance. It ads that further enhancing the driver and passenger experience is a 9-inch touchscreen display that works with Apple CarPlay for iPhone, Android Auto and MirrorLink for compatible smartphones.

While cabin space is designed for ample comfort in both the first and second rows, there has been no compromise in luggage space. The large 490-litre luggage compartment provides plenty of space to store luggage for a wide range of lifestyles and purposes.

Suzuki claims that the plug-in hybrid system in the Across provides unparalleled fuel economy (although their press release makes no specific fuel efficiency claims) and smooth acceleration, with CO₂ emissions of just 22g/km.
It says that at the core of the plug-in hybrid system is a powerful front electric motor that delivers vigorous torque at low speeds and combines with a powerful 2.5-litre petrol engine for rapid acceleration at higher speeds.

With a maximum output of 134kW and 270Nm of torque, the electric motor draws its energy from an 18.1kWh (50.9 Ah) high capacity lithium ion battery that is mounted beneath the floor.

Paired to the electric motor is the A25A-FXS Dynamic Force engine, which functions as a charger for the battery and provides power assistance to the electric motor during high-speed driving if required. Suzuki says that it is designed to deliver both high output and excellent fuel efficiency.

The Plug-in Hybrid system is equipped with four modes—the default EV mode, Auto EV/HV mode, HV mode, and battery charger mode—which the driver can select depending on driving conditions and battery status. In EV Mode the vehicle is driven entirely by the power of the electric motor even under full acceleration. When in Auto EV/HV mode and HV mode, the engine contributes to power delivery when required, such as when the accelerator is pressed strongly. To store electricity for EV mode when the charge is low, the battery charger mode runs the engine to re-charge the battery.

The state-of-the-art E-Four electronic 4×4 system in the Across provides drivers with genuine 4×4 performance while maintaining superior fuel efficiency.

Pricing details of the Suzuki Across and indeed the Toyota RAV4 plug-in hybrid version have not been released to date.

Toyota unveiled the RAV4 plug-in hybrid concept at the Los Angeles Auto Show last November. It features a circa 300PS drivetrain and claiming about a 65km electric driving range.