Volkswagen Commercial Vehicles tells us that it is raising the bar with its premium pick-up, the Amarok V6, which it is launching in the Irish market this month with a starting price of €31,268 eplus VAT. 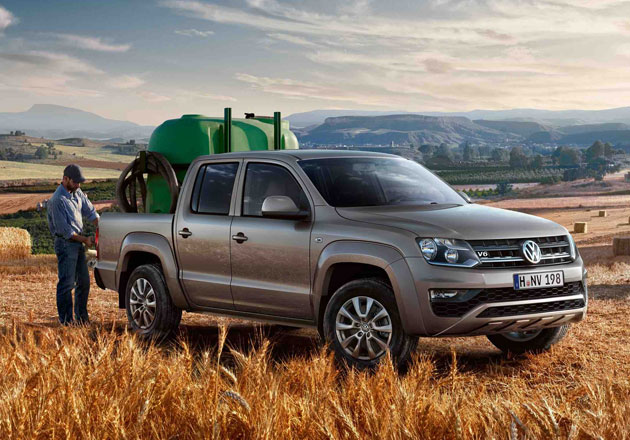 VW says that it is enhancing its performance potential, thanks to their latest generation of V6 engines. There’s an additional litre of displacement offered by the 3.0-litre engine, while VW says that the pick-up will continue to boast impressive on- as well as off-road capability.
The new engine will deliver up to 550 Nm of torque and a power output of 224 HP, which it says is over 50 HP more than the average for vehicles in this segment. VW says their new refined V6 diesel engine propels the Amarok from 0-100 km/h in an impressive 7.9 seconds.

It adds that the agile new engine meets customer requirements for high torque at low engine speeds even under the most demanding of conditions. The powerful top-of-the-line six-cylinder engine produces its maximum torque at only 1,500 rpm, enhancing the driving experience as well as refinement and fuel economy.

Irish buyers will have a choice of 204 HP or 224 HP 3.0 V6 engines, combined with a permanent all-wheel drive system and a ‘Torsen’ differential with the 8-speed automatic gearbox.
Irish specs will include 17-inch brake discs on the front axle of the 224 HP Amarok version and 16-inch discs at the rear ensure that the powerful pickup always comes to a stop quickly and safely. The Automatic Post-Collision Braking System, which has won multiple awards, is also included as standard.

Alan Bateson, Director of Volkswagen Commercial Vehicles in Ireland said: “We were delighted to launch the new Amarok V6 at the 2016 National Ploughing Championships where we provided visitors the opportunity to experience the new V6 on a one acre off road driving experience. The Amarok has really evolved into a vehicle that isn’t just about the undoubted practicality, but also about good looks, road presence and more engaging driving dynamics. And with the new powerful six-cylinder engine it produces a best in class torque of 550 Nm, which is 130 Nm higher than in the previous model. Irish motorists can avail of a 24 hour test drive at their local dealer from October.”

The Amarok is available in Trendline, Comfortline and Highline trims. The wheels in the various equipment levels offered with the Amarok are now larger, which makes for an even more powerful and sporty appearance. The Amarok Highline features 18-inch alloy wheels and the Park Distance Control parking assistant, which utilises a rear-view camera. The overall impression of the Highline is improved further by bi-xenon headlights, LED daytime running lights, LED licence plate lighting and a well-equipped and luxurious interior.