The T-Cross¹ is set to launch a new form of SUV from the Volkswagen brand. First shown in concept form in 2016 at the Geneva Motor Show, the series version is now making its way in the direction of actual production.

The world première of the new T-Cross will take place in the autumn and it will get here next year. In the meantime, Volkswagen has given us a first look at the future SUV in the small vehicle class.

With the T-Cross, Volkswagen is expanding the spectrum of Sport Utility Vehicles to include a small model. “I am more than one thing” – that is their claim with the introduction of the T-Cross. “More” is thus to be understood as a program, offering more, but nevertheless not costing more.

T-Cross, T-Roc, Tiguan, Tiguan Allspace and Touareg will now be the five SUV formats of the brand in Europe. But, Volkswagen says that the new T-Cross will enrich the SUV range in China and South America, as well. 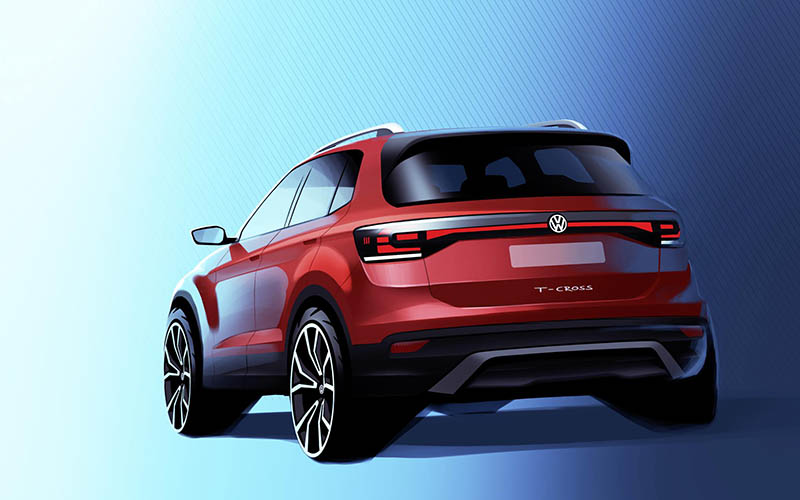 VW claims that the 4,107-mm-long Volkswagen is designed with charisma, always front-driven, functionally conceptualised, and cleverly constructed. And that it is at home in the city, and ready for the small and large adventures both inside and outside the urban jungle.

The German carmaker says that the modular transverse matrix (MQB) platform that the new T-Cross sits on creates a surprising amount of room. For example, the back seat can be adjusted lengthwise, for more knee room or more room for luggage.

It adds that the positive influence of the modular transverse matrix affects all areas. Thus, the T-Cross is entering the market as one of the safest vehicles of its class, guaranteed through excellent crash properties and a large spectrum of assistance systems.

I look forward to seeing more later this year on the new and smaller of what will then be Volkswagen’s five SUV line-up.