The record-holding Honda Civic Tourer which embarked on an epic road trip across Europe to prove its real-world fuel economy has made one last journey…to the British Motor Museum in Warwickshire. 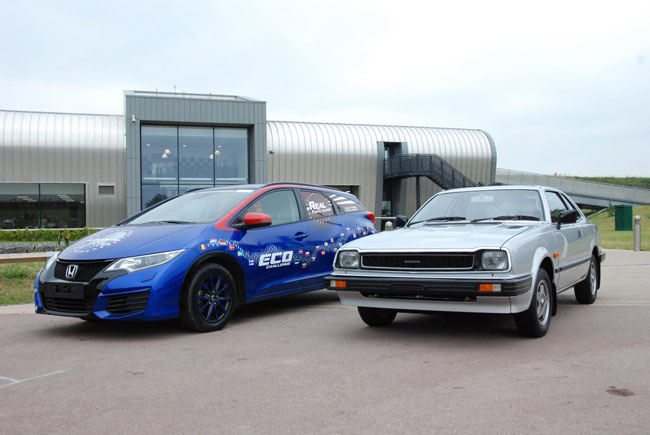 The British-built fuel-sipping Civic currently holds the Guinness World Records title for fuel efficiency, having completed a gruelling drive across all 24 contiguous EU countries in just 25 days, with Swindon-based Honda engineers Fergal McGrath and Julian Warren behind the wheel.

Recording an average fuel consumption of 100.31mpg across the 8,387 mile trip, the Honda stopped just nine times to refuel, at a total cost of just £459, with an average tank lasting an incredible 932 miles.

The record was set in June 2015, with strict rules stating that all 24 EU countries had to be visited and the same two drivers must be in the car for the whole journey, giving Fergal and Julian the challenge of driving a daily average of 600km, sharing a minimum of 7.5 hours in the car each day.

The car was presented last week to British Motor Museum curator, Stephen Laing, by Fergal and Julian, taking its place in the Collections Centre to form part of its line-up of more than 300 cars. Fittingly it joins one other Honda – a Prelude that was a gift to British Leyland’s chief, Sir Michael Edwardes from Honda boss Mr Kawashima – when the two companies signed their historic partnership agreement in 1979.

Honda has been a major manufacturer in the UK for 25 years, building and engineering cars at its Swindon factory.